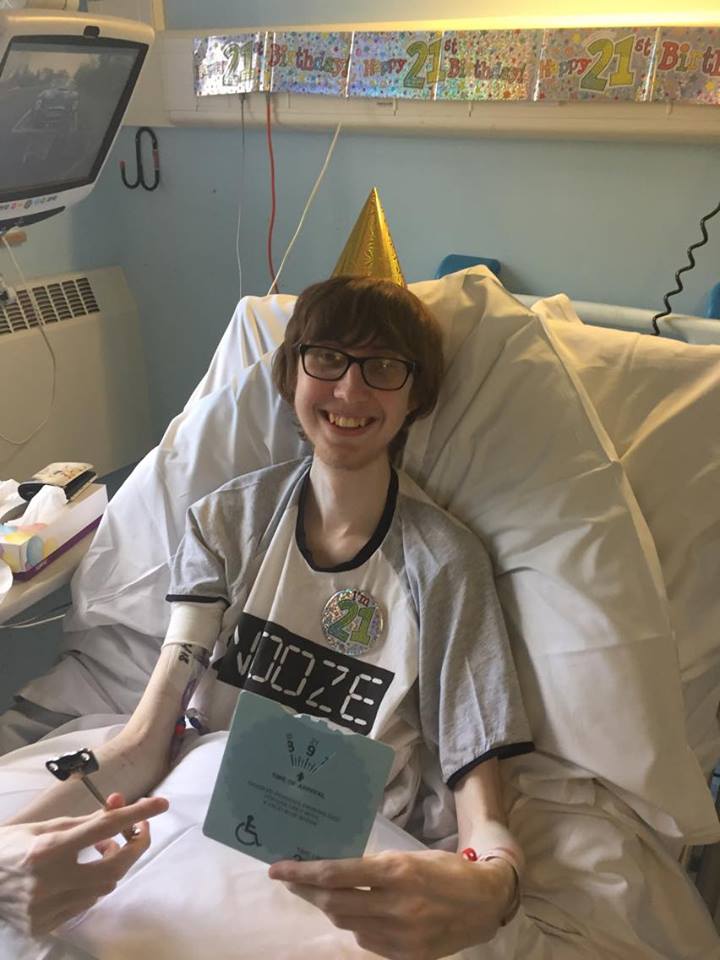 Yes, for the past 6 weeks, I’ve been in hospital due to my Crohn’s Disease. My entire 2018 so far has been spent in here breathing the same air (bar a few days).

I’ve been without food for the near whole six weeks… a liquid diet for the first week, and completely ‘nil by mouth’ (not even water) for nearly the whole other 5 weeks. I’m still nil by mouth today, meaning no cake… no candles… just 100% pure ‘TPN’ feeding directly into my veins for 18 hours a day. What it’s like to go without eating or drinking for so long, is difficult to put into words.

And after all this time spent here, I’m still not done…

I’m currently waiting for a transfer to a specialist hospital in order to have a procedure called an ‘ileostomy’ to remove the diseased part of my bowels – and hopefully give me my life back!

Am I scared? Not really. Am I fed up with being in hospital? A little. The only thing that I really care about right now, is not having to suffer anymore. At my worst, Crohn’s Disease meant any tiny bite of food would give me horrific pain. I’m hopeful those days will soon be behind me.

It IS my 21st Birthday however, so I do have some things to celebrate – despite not being able to eat any cake…!

– My needle phobia is practically gone

– I got my ‘Key to the door’ – A radar key that gets me into every disabled loo in the country! (Super handy for me!)

– Hopefully in the next few weeks, I’ll be having my surgery, and starting the process to gain my life back

Whether you are fighting an invisible illness, know someone who is, or are just reading this blog out of interest, know this: No one ever fights alone. There are so many people fighting the same battles, despite how lonely it feels.

Your illness does not define you. You define your illness. Despite being in hospital for 6 weeks, I’ve kept so busy taking up hobbies I’ve never had time to, working my butt off to finally get a Couponing book written (which is very near completion!), and raising awareness for this horrible disease, despite the advice being to rest.

What’s would be the greatest gift for me this year? Awareness! Invisible illnesses such as Crohn’s & Colitis devastate 100,000s of lives – hence this blog. Let’s not stop shouting until a cure is found. Let’s continue fighting together.

I’ll keep you updated with my progress, and hopefully once I’ve had my surgery… i’ll be catching up on the copious amounts of free food i’ve missed! Lockdown Quiz – Test your general knowledge against mine